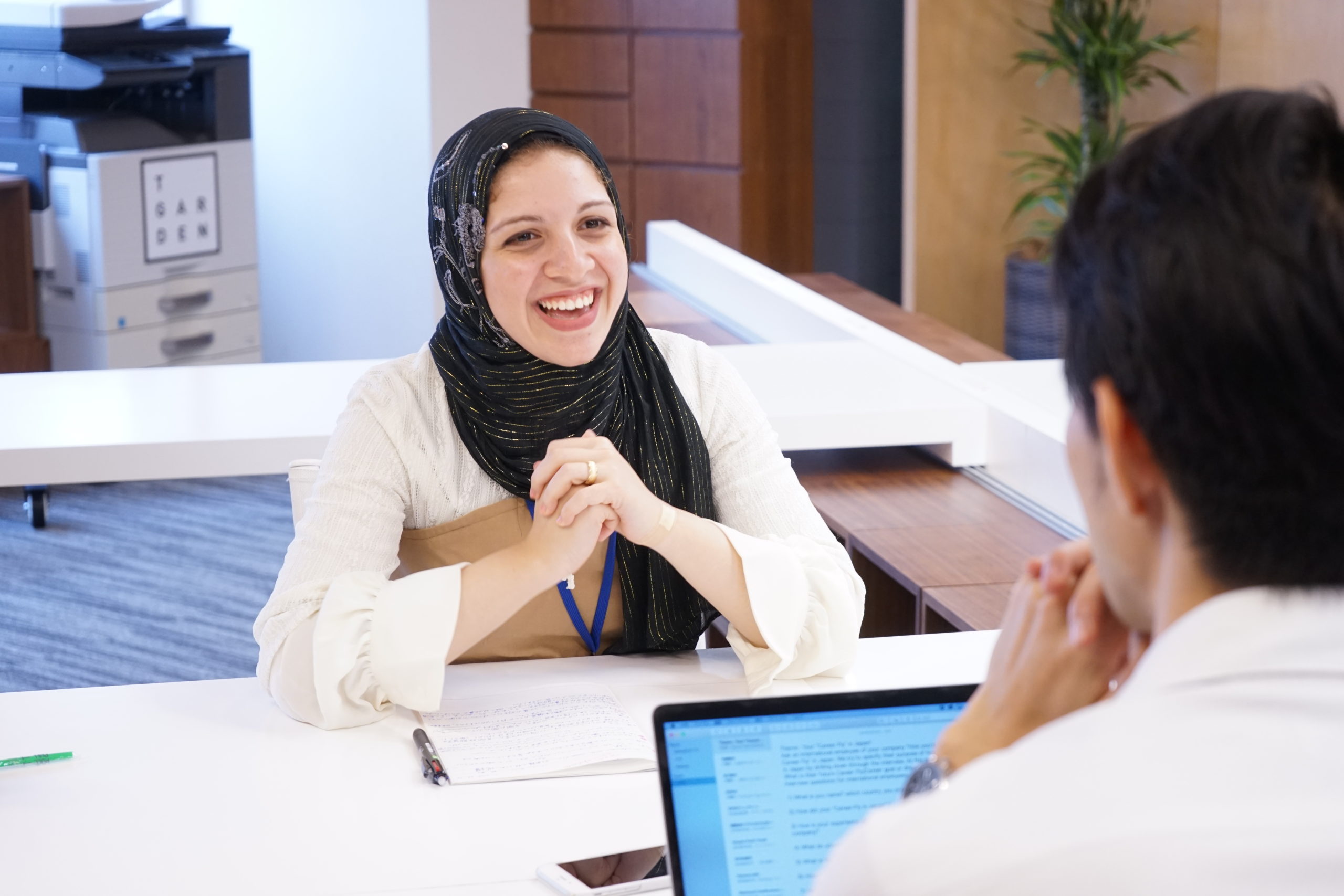 Career Fly(CF): Can you please introduce yourself?

Mai Sayed(Mai): My name is Mai Sayed AzzozAbuzied. I was born in Cairo, Egypt. I am 25 years and have studied at Cairo University for 4years about Japan, its culture & Japanese as a language. My aim was to come to Japan and have a life here. And my hobby is reading

CF: What brought you to Japan? Why were you so interested in Japan?

Mai: When I was in High school I read about Japan and its history. I was impressed by Japan’s history of redevelopment in just 50 years after the infamous destruction caused by a nuclear attack. Since, then I was curious to know how Japanese people think, work & what is their main motivation. I always wanted to be a part of this glorious system.

CF: When did you come to Japan?

CF: In these two years could you discover how Japan made its recovery & lead to this level of development?

Mai: Actually in my first year I was very new, being the first time in abroad & was just amazed by this country.
Later during my internship, the first discovery I made was that it wasn’t important to learn the language to understand the story behind the development, but the other way round. It’s important to learn the culture & mentality to understand the motivation behind Japan’s redevelopment, language is just a medium.

The second thing was that I always thought all Japanese people like to work a lot, but no, it is society’s expectation. Japan’s society expects a Japanese individual to work hard & contribute towards Japan’s growth.

Mai: Yes , I love Japan & also the way Japanese people work. Even if they don’t love their job they do it with full commitment. I like that. They see the bigger picture over their likes & dislikes.
I like this motto “To do your best now & later maybe you can get what you want”.

CF: When did you start working here?

CF: Congratulations on so many endeavors.

CF: How did your career -fly in Japan?

Mai : During my internship, I was told that my main task would be to hire foreigners for the company, but later my responsibilities were changed. I was briefed more & more about the company & the Japanese system. In a way, it was good for me.

Now, I work on the reception desk & later it can change to something else that I wanted. For now, I like my job & the way I started my career here.

CF: What is your experience of working in a Japanese company in Japan?

Mai: I will start with merits

Merits: I can’t see a major social gap in Japan, unlike other countries. In other countries, also in Egypt: you can easily make-out a rich person but, here everybody is the same. The standard of living is high but the majority of people are able to afford it. It makes me feel very comfortable.
Second is a convenience store. It is so easy to buy things. Wherever I go, I find them & can buy anything at any hour of the day. This concept is not anywhere else in the world. No matter where you go in Japan you can find anything & everything, plus it’s affordable too. Unlike other countries where some exclusive things go beyond our buying limit. In Egypt buying electronics is very expensive because the earnings aren’t that much. Here, since earnings are high, electronic items look affordable.
Third, I don’t feel like a foreigner here. Even though I know the language, but still people around me make me feel so comfortable & at home that I don’t feel that I don’t belong to this country.

Demerits: I had read earlier while learning about the Japanese culture that when you are in a group, that group expects you to like & do the exact same things as the other group members. For example, to eat the same food, dress similarly.
Because of that expectation, I fear I might lose my own identity. A couple of my German & Italian friends feels the same. Few years down the line I might become a complete Japanese. It makes me feel a bit worried.
Also, people here say sorry for everything. Even without explaining why did they do the mistake, they just say sorry easily. They are always over-apologetic.

CF: That’s why Career-fly is working to promote diversity & hire more foreigners. You are a great example of being a foreigner female, working in Japan & making your own mark.

CF: Can you please share two good things about Japan that you experienced so far?

Mai: Convenience stores & toilets in Japan. Both of these things make Japan a special country.

CF: How long you plan to stay in Japan?

Mai: I wish I could stay till I turn 60 or maybe till I become a grandmother. lol. But now, since I am married I don’t know what is there in the future. For now, my partner & I prefer to stay in Japan as long as we can.
I want to apply of permanent resident visa or maybe 10 years down the line I wish to apply for a Japanese citizen. It’s difficult to get but I have a dream. I want to get a Japanese passport.

CF: How do you think your career will fly in the future in Japan?

Mai: I wish to hire foreigners for a company. I wish to guide & help them on the basis of my own experience. I have learned a lot during my hard time in Japan as a foreigner & as well as in Egypt.
I learned this difficult language so that I can work here & stay here as long as while helping other foreigners to come & settle in Japan.

CF: Can you please tell me the best thing about Japan’s corporate culture?

CF: Have you experienced the pressure about overtime here?

Mai: Actually no. The people here in this organization are so nice to me & tell me to leave when my shift is done. If if they see working even for 5 minutes extra, they ask me to go immediately.

CF: So this company is a good company.

Mai: Yes, It is a very good company.

*The photo of a script by Mai’s handwriting

Be yourself and make your dream come true step by step

CF: So, is your work-life balance good here?

Mai: Yes, I was able to settle down well & they gave me enough holidays to register my marriage & look for a new apartment.

CF: Any suggestions for future candidates who want their career-fly in Japan?

Mai: Don’t exert, don’t rush. Take it easy, work at your own pace. Learn gradually, absorb as much as you can & later give out. Be yourself.
Foreigner usually tends to over-perform in the first month itself & then drain out their energy. Don’t commit that mistake. Grow step by step.

CF: Yes, it is very important to be yourself. Thank you for your great advice!  We wish you good luck with your new job and your CareerFly.

Takuma from Career Fly and Mai san from Taisei

Taisei Corporate  Ms. Mai Sayed Azzoz Abuzied
She is from Egypt. The first arrival in Japan was an exchange student at Tsukuba University(through Cairo University). She’s experienced part-time jobs because of her curious personality. During the student, the internship program for a year in the largest corporation grew her professional mind. After that experience, she joined Taisei corporate. She contributes them by a multilanguage ability and the highest communication skill of her.