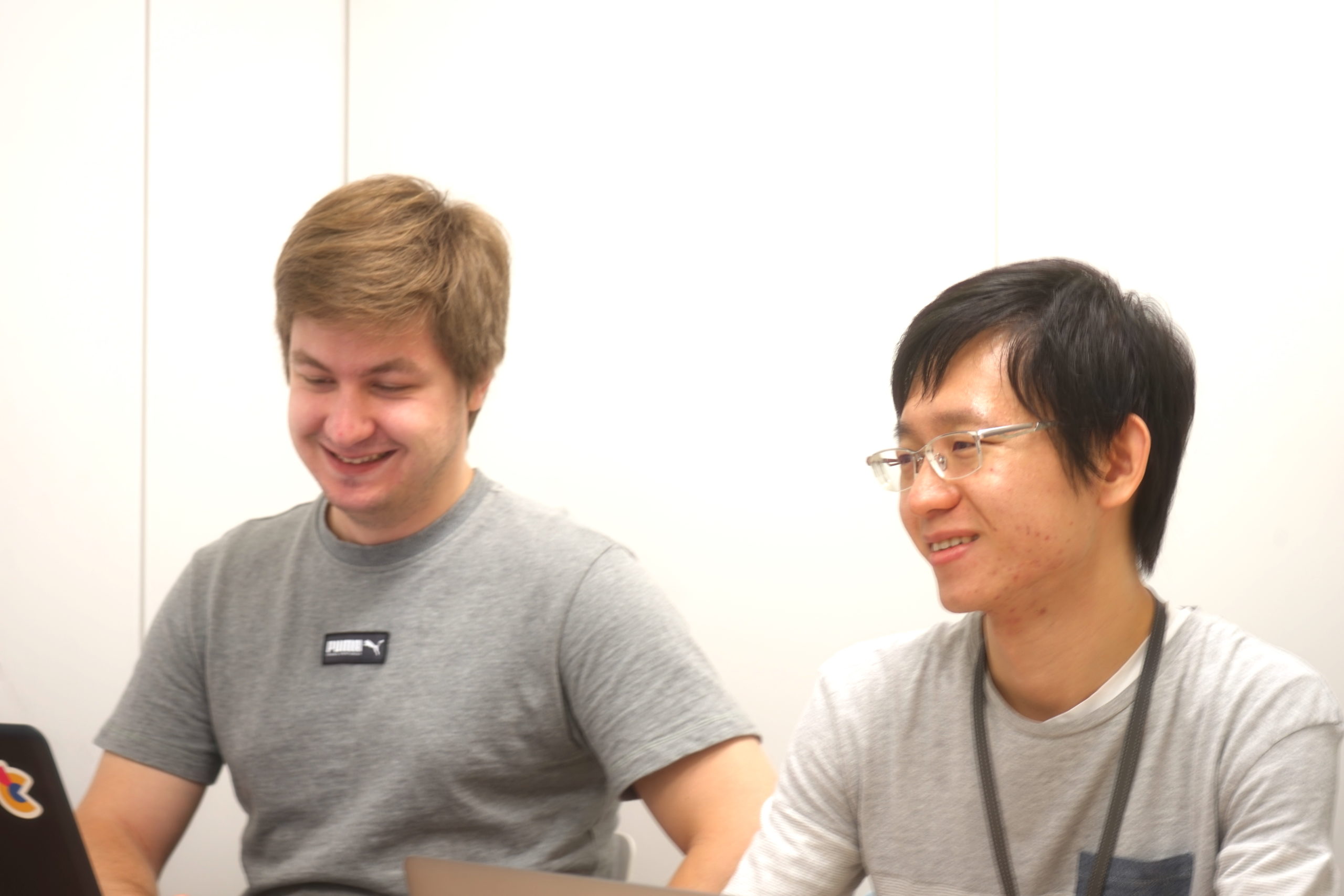 CareerFly ( CF ) : Can you give a brief introduction?

Mr. Low Ker Li( L ): I am from Malaysia. I came to Japan to study at a Japanese university. While doing my course, I did a part-time job in Diverta and since then I have been associated with them for over two years. After my graduation, I started working full-time here. It’s quite a nice and forward-looking company to work for.

Mr. Artem (A): I am from France. I was working in France for over 3 years as a consulting engineer & developer specialized in building web portals. Here at Diverta I’m working on our main product which is a global cloud-based aggregator of portals/websites, so it feels like an evolution of my career. I’ve initially started as a part-time employee while continuing my intensive course of Japanese in a language school. After finishing my language course I’ve transitioned to a full-time position. Recently I’ve hit the milestone of 3 years working with Diverta.

A : First, I wanted to get the experience of living in a country with a very different culture. European countries did not feel so different for me, so I decided to try out Asia. Ja-pan was a natural choice since I already was interested in Japanese culture for a while. I have initially planned to do only one year of working holiday, but after coming I’ve quickly realized that without understanding the language the experience would be quite pale – Japanese characters are literally everywhere and the general English level quite low. So I’ve enrolled on a Japanese language course after a couple of weeks.

L : I wanted to study Robotics and Japan being the best in that field, made me to opt for a Japanese university. I have been here for 5 years now.

CF: What is your current project? What are you working on?

A : I am currently working as a lead tech on Diverta’s main product RCMS which is the cloud-based CMS that enables users to rapidly spin up a website with lots of features out of the box. We are constantly evolving it by adding features and updating technologies. Diverta is a 15-year-old company and unlike many Japanese companies, our boss, being an engineer himself, pushes us to embrace change and new technologies. Therefore it is exciting for us to be able to suggest and implement new features, tools or technologies, to have the freedom to improve whatever feels like needing improving, and as a developer, it is a constant flow of fresh air.

L : I mainly work on AI projects and lead the AI team. Aside from that, I am also a part of the RCMS modernization team where I share my ideas and opinions. Among the AI projects, I mainly work on the customer behavior analysis project.
I am in this project since the start, so I get to choose the technologies I think is the best fit for the problems.
In the AI projects, we leverage Deep Learning and Machine Learning technologies to solve some problems. However, there is a lot more than that, for example, building the data pipeline and visualizing the data.

CF : Since you are involved in more than one project, do you need to do overtime as well?

L : Not a lot. We have flexible working hours with four hours of core time. Even if there is a need to sit for long hours due to work, it can be compensated later by leaving earlier another day. Before coming to Japan, I had the impression that Japan has a poor work-life balance, but after working in Diverta, that impression has changed.

CF : Apart from your work what else do you like about Japan?

A : I like the fact that Japan is so convenient & safe in so many ways. You have no logistics problem, trains are always on time. Air is clean and so is the city. Japanese people show respect for each other. Unlike France, in Japan the respect is part of the manners.

L : For me too, Japan is very convenient, safe, and well connected by public transport. They have the best service industry. Also, people don’t lose things here easily. People here have pride and will not stoop so low to steal other people’s belongings. Ja-pan is what it is because of its people.
Japanese people are very respectful, and because human behavior tends to be influenced by their environment, even foreigners in Japan behave more respectful and well-mannered.

Freedom to Communicate with our CEO is the Most Wonderful Culture!

CF: What is about the best and worst part of Japanese corporate culture?

A : I can’t say (and don’t think) it is like that in all Japanese companies, but in Diverta I think the best part is the engineering freedom and the desire of constant improvement. We can ask our CEO about anything, suggest any change and if accepted, immediately implement it.

L : It’s a flat culture and ideas are always welcomed.

A : There are fixed and rigid rules that usually don’t change. Unlike France, where there are not that many rules yet we learn to be self-responsibility (corporate responsibility), in Japan, the employees are not trusted to think properly or behave responsibly, so there is a lot of basic, rigid rules that all have to respect regardless of the context. If you have respected the rule but the consequence was bad, you are not to blame. So by fear-ing the blame, everyone sticks to the rules and people are rarely proactive. In France, you may take risks with a proactive decision, where you could be praised or blamed depending on the result. However in Japan, there is a policy of not allowing anyone to do anything unplanned, therefore everything feels like it should be covered by the rules. Even though I think Diverta is better than most Japanese companies, I can still feel this lack of trust to make decisions.

L : Yeah, in a way it is their society and they have been programmed to function according to rules. Often, rules are not explicitly stated, but people around you convey it in a subtle way.

Want to get more challenging experience and keep learning about technology

CF : What are your future plans?

A : My objective is to get Japanese permanent residency which will give me the freedom to live and do whatever I want. I really like Japan, I’ve studied Japanese language and it became my second home. So I want Japan to always welcome me without having to worry about a new visa every time.

L : Same here. I too wish to get a Permanent Residency in Japan. I came here as a student and have invested so much by learning a language and picking up the culture. I want the freedom to explore more countries and then come back to Japan again whenever I wish.
For me now Japan has become my home. When I go back to Malaysia my friends have to be my tour guide. I am more familiar with places in Japan than in Malaysia.

CF: What are your corporate goals?

A : Always stay in touch with modern technologies, continuously polish my skills and expand my knowledge. As long as the company is providing me the liberty to play with new technologies and be creative in my daily work, I am happy.

L : My final goal is to start a company of my own, although I’m still not clear on what kind of company it will be. I wish to work in different countries and technologies. I knew programming and electronics before university and decided to study Robotics be-cause it was something different. I believe in going beyond my comfort zone and exploring new areas.

CF: Do your family & friends want to come to Japan too?

A : Yes, my friends come every year. About the family, as long as I’m an independent and self-sustaining adult (which I am), they are happy.

L : My family is also satisfied and happy that I am living and working in Japan.

What’s your strength? Grow it and take a step to be how you want to be!

CF: What is your advice for future candidates who wish to work in Japan?

A : If you dream about a good career in engineering in your country or abroad, you need solid technical skills. These are best acquired when young, at school/university but also at personal projects. Focus on being curious, learning and trying technologies. Your future employer will notice your skills. Don’t try to fill your CV with buzzwords but explain what you are good at.
If you dream about working in Japan (or any other country), my best advice is to not drop out of school and push to get your diplomas (they do matter). After graduation, armed with proper skills you can apply and get a job quite easily – especially in Japan. Some companies require the language though.
For instance at Diverta, when we interview people, we don’t care about candidate experience – most important is what the person is able to do, his potential. You need to show your employer that you have the ability to engineer.

L : If you want to go abroad to study or work, just do it! Don’t think it’s impossible.
When I tell people I study or work in Japan, they think I did something miraculous that no normal person could do! But no, I am just an average person who believed in dreams and acted upon them. So, if you have a dream to go abroad just do it and start working on it.

Mr. Low Ker Li  from Diverta
He is from Malaysia. To study at university he came to Japan. As a part-time worker, he joined Diverta while he was studying in university. After graduation, 2 years ago, he joined Diverta as a permanent employee. Now he leads the team of AI projects.

Mr. Amtel from Diverta
From France. He has about 3 years of working experience in France as a web application engineer. Now he leads the RCMS team, which is the main product of Diverta.